It's been a whirlwind of a month. I've gotten more done in the last six weeks than the last six months and I "blame" a few different folks for contributing to my high level of productivity.

In late July, I walked through an integrated strategic development process and set an intent to serve more people, leverage tension management, and create sustainable functionality. If that all sounds like gibberish, that's fine, because going through the process (with a little guidance) kicked me into high gear. 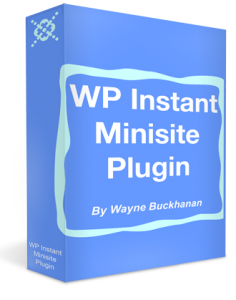 The week after I started through the process I finished six client sites, had a breakthrough in my research, and started developing a new product in partnership with John Delavera. I was doing so much good work that one of my friends lamented "where's the fun Wayne?" (Don't worry, he's still here, just resting during this half of the tension cycle.)

The month was rolling along, I get the product ready for testing, and as I start sending out review copies -- disaster -- one of the web hosting companies I use disappeared and took the new product site with it. Annoying, but no big deal, they should be back in a couple hours.

That's when I made the mistake of waiting.
A week later, still no signs of the hosting company.
Two weeks pass, still no word and no hosting.

Fortunately, I caught myself in the hurry-up-and-wait mode and broke out of it.
Switched hosting providers, got everything set up again, and slipped back into hurry-up-and-wait for the reviewers. This time I noticed it after a few days (instead of weeks) and pushed forward anyway.

During this waiting time Marlon Sanders sent out an email recommending a book called The 10x Rule by Grant Cardone. Grabbed a copy, read it over the weekend, and kicked back into gear. The major premise of the 10x book is that success isn't something optional or nice to have, it is our duty and obligation to be successful. The title comes from Cardone's suggestion for reaching success: make 10x bigger goals and take 10x as many actions.

The funny thing is, I'll give Cardone credit for making a better meme, but I've taught the same principles that drive The 10x Rule before! It's the "shoot for the moon and even if you fall short you'll land among the stars" method of planning with what I call MnM goals.

Anyway, I kicked back into 10x high gear and leveraged the "do 10x as many actions" mantra, and my commitment to Delavera, to crank out my first product release into a particular marketplace (something I'd been considering for way too long without having committed). I found myself using the 10x mindset unconsciously, then realizing that the three solid reviews I got in time to release the product were the result of having given out 20+ review copies and if I'd given out the half a dozen I'd started with I would have been lucky to have any reviews!

This past weekend Marlon sent out another email with a challenge that meshed nicely with the 10x factor. The challenge was to implement two time blocks a day for 7 days, one for producing and one for promoting. I took him up on his challenge and set aside two blocks each day.

Again, time blocking is something I'd heard from Paul Evans and Derrick Franklin, but hadn't thought to label them with core activities. (Thanks for that prompting Marlon! You really are the best at breaking marketing down into simple pieces.)

From all of this, I created a cool product called WP Instant Minisite. It released on Tuesday, and is already in the black and poised to pay a nice return.

How are you going to apply these this week?
Leave a comment and leverage that public declaration!